skip to main | skip to sidebar

Turmeric is often hailed as a wonder supplement for its anti-inflammatory, anti-oxidant,a cure for
colitis, stomach ulcers, high cholesterol. upset stomach, diabetes, depression, HIV, uveitis, viral infections. and some even believe anti cancer properties. Curcumin and Turmeric are often loosely used as describing the same thing. Actually Curcumin is just 3% of the Turmeric rhizome of the plant but it is the most effective ingredient. Turmeric is the natural plant's underground stem and has been consumed in the India subcontinent as a spice in foods for thousands of years for its therapeutic properties. It is also used as a face scrub to enhance beauty, its paste with quick lime as a poultice for bruises and cuts; and the dried powdered version dissolved in milk as  medicine for cold, cough and fever.
Lately it has been available in its raw form in a lot of Asian stores and can be utilized in salads, dressings and even in a marinade. 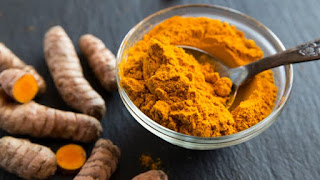 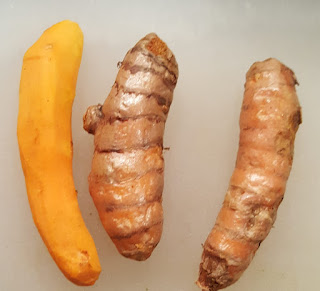 Since it is a little bitter to taste I used some fresh Turmeric, some ginger, lime juice, salt, chopped cilantro and green chilies 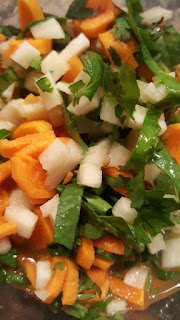 Posted by Sudhir at 3:02 PM No comments: