skip to main | skip to sidebar

Solar Eclipse - with myths surrounding it 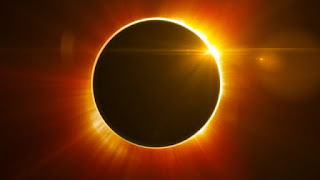 A total solar eclipse is one of the most unnerving happenings in the world for all living things. We take for granted the rising and setting of the sun - just like the ever present gravity. Almost all living organisms depend on this solar pattern and respond to its rhythm in their own ways. In addition to its constant gravitational pull to which all life responds (as do the water bodies with tides) the more marked difference comes because of the sudden darkness during an Eclipse. It is coincidental that the sun though approximately 400 times larger in diameter than the moon, is also approximately 400 times farther from the earth - consequently it kind of appears to be the same size and almost perfectly gets covered by the moon's disc during a solar eclipse.

For such a once in a lifetime event, it is quite unsettling and birds have been known to drop from the sky while animals on land suddenly decide to call it a day thinking the day is over. Also a lot of myths (we call them so because our present day science cannot explain them) have perpetuated around this event. http://www.ajc.com/news/national/sun-eating-demons-bizarre-but-brilliant-myths-and-superstitions-about-solar-eclipses/QTAmVLA9m1z4KVCUIeTVuI/

Of particular interest to me is why a lot of ancient cultures decided to not eat or even step outside during the time the sun was covered even partially. Also perplexing is the custom of shielding the pregnant women, to the extent of sending them inside caves during the days when people lived in thatched huts.

I would love to know more about the Indian tradition of placing Dharba grass leaves (aka DOOB) on pickles and preserves so that they do not go bad. There has been some research but it does not seem conclusive enough to me. http://www.thehindu.com/news/cities/Tiruchirapalli/darbha-grass-a-natural-preservative/article7000098.ece

Hoping to be able to drive down south to watch this solar eclipse on August 21st.